The next stage of D12 Combat

- June 22, 2022
For those who are not a reader of All Dead Generations , not too long ago there was a post about creating an "alternate, alternate" combat system for D&D by thinking about what might have evolved from a different set of wargames (specifically, Strategos ). I found it an interesting read and absolutely love theoretical alternate histories about how D&D could have developed.     So, to keep this idea developing, I am taking it into the next stage: refinement for actual use with OD&D by someone unfamiliar with the original source material.      As a warning, the refined system I am presenting here is just my interpretation of it and it certainly doesn't include everything you could possibly need (it doesn't even include everything from the original post!). Still, I think this is a productive exercise and useful to improve the system and hopefully create something that I can use in my own home game! The Concept      This new combat system will have a few d
Post a Comment
Read more

A System of Anti-Magic

- May 08, 2022
Sorry for the long delay between posts. Things have been hectic and I have run out of steam a bit after working on the Gygax 75 Challenge. I have one post I am working on, but it is a bit complex and taking some time to work through. In the meantime, here is a recent idea that I had about making magic work in your games.       For setting reasons beyond description here, the techniques to counter magic are common knowledge. Therefore, anyone, on seeing someone attempting to work magic can attempt to counter it as a reaction (or interrupt or something that somewhat limits this).      For "normal folk", they can declare one of three things: the name of the spell, what the spell will do, or the school of the spell. Correctly naming the spell or what it will do automatically cancels it. Correctly naming the school allows them to make an Arcana test to counter the magic. Getting close enough on the name or school will also allow for this Arcana test.      For wizards or other
Post a Comment
Read more

Taking a stab at Gygax 75: The Martian Setting, Part Five

- April 03, 2022
This is the final week of the Gygax 75 challenge! Unfortunately for me, this week ended up being surprisingly busy and I didn't get nearly as much done as I would have liked. Still, each part I did complete ended up being larger than was probably necessary, so I think it evens out.    Back to part four Week 5: The Larger World Calendar     For this, I decided not to do a standard calendar but use the approach for events from Oriental Adventures, where you have events rolled over time to ensure you get dynamic changes. For background information, the calendar has 12 months of 4 weeks each, with each week being 7 days long. Additionally, there are 2 days "outside the calendar" at the end of the year, which are a time of hedonistic celebration. Seasonal Events     Roll 2d6 on this once per season (3 months), with a d12 roll telling you what week the event begins in earnest. 2.  Dragon Sightings, lasts 1d3 weeks. External Chaos. 3. Nomads Visit, lasts 1d3 weeks. Rare trad
1 comment
Read more

Taking a stab at Gygax 75: The Martian Setting, Part Four 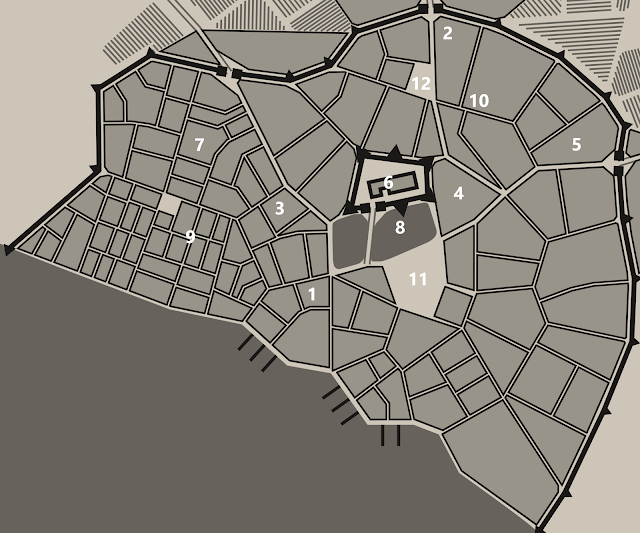 Another week, another portion of the Gygax 75. This week ended up being much more difficult than I expected, because of the two thorny problems of mapping the town and how to name things. I spent a large amount of time fiddling with Vulgar , a piece of software that helps automate language creation. I still keep finding issues, but I also need to be done with this week at some point so it will stand. Back to part three Week 4: Town Features      For your viewing pleasure, I present the City of Soorzel Somfawt (the nobles). It was made very quickly in Watabou's City Generator , though I am not particularly happy with it. The estimate on this map is that it would contain 800 buildings and be about a mile across after generously doubling the size of everything. Thus, I have decided this is the main portion of the city where the clans live and things generally happen. Outside of the walls are smaller compounds for smaller clans and the clan-less, explaining why my other map shows
Post a Comment
Read more

Taking a stab at Gygax 75: The Martian Dungeon, part 3

Wow, slightly over a week later and I can say this was the biggest week so far. Didn't help that I was apartment hunting and travelling while doing it, but I do have the first three levels of the starter dungeon to present! I haven't completed the dungeon as much as I would like, particularly levels 2 and 3, but it is once again enough that I could probably run a session or two with it.     For the curious, all mapping was done in  dungeon scrawl , which is a nice free dungeon mapping software that runs online! Back to part two Week 3: The Dungeon The entrance to this dungeon is a sunken hole in the ground, leaking cool air from below. Level 1      This level is themed as a buried temple, though it ended up being pretty small. Still, it should provide some interesting adventures, particularly on repeat visits. The Statue in 05 can very easily become a recurring problem/feature of the level depending on how it is handled. The entrance to the dungeon is a hole, above a loose
2 comments
Read more

Taking a stab at Gygax 75: The Martian Setting, Part 2 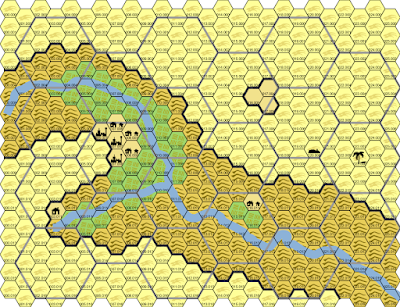 Week 2: Surrounding Area Back to part one Hex Map     Mapping this setting has been an interesting challenge. I tend to get a little in-depth with worldbuilding, but did my best to hold off on the details. So, without further work I present, The Map:     I did this in Worldographer , after doing most of the work on paper first. Now, the most important detail of this map is that the hexes are 1.5 miles across. The larger, grey, hexes are 6 mile hexes. While 1.5 miles might be a weird number, but works well with my travel system, which makes use of Leagues (how far someone can walk in an hour). Another interesting thing about this map is that inside of the canyon is entirely filled with hills, because the interior of a canyon is basically only flat if someone comes along and manually flattens it.     For the sites on the map, you can see the main city located around 07:07. It has a population of about 5,000 people, making it small but still notable. At 03:11, you can see a private manor/
1 comment
Read more

Taking a stab at Gygax 75: A Martian Setting

- March 01, 2022
Some Background      For those who are not aware, Gygax 75 is a sort of challenge (available  for free here ) based on creating a new campaign. It is based on an article written by Gary Gygax in 1975, less than a year after the original editions of D&D were released. The challenge itself is broken up over a series of weeks, with each one focused on a different concrete task.      I have been interested in trying the challenge ever since I first encountered it, and now that I have some inklings of an idea for a Mars inspired setting, I decided that now is the time. Week 1: The Concept Pitch Points Everyone lives in enormous canyons . This red planet is inhospitable outside of enormous canyons which snake across the surface of the planet. Every canyon has a river snaking through it, providing life-giving water and supporting the agriculture necessary for large, organized society. The soil is iron . The planet is red, because nearly all of the soil is incredibly iron-rich clay. Iron i
1 comment
Read more

- February 19, 2022
In the past weeks that I haven't been writing here on the blog, I have been creating and running a Pirate Campaign for my normal table. We have been having great fun with it, but as I have worked on cobbling together the systems to run it, I have hit quite a few brick walls. A Standard for Every Ship      Among the most annoying problems I have encountered, is the handling of ships. Every system I have encountered has its own ways of handling ships and they rarely agree, even if they are ostensibly easily convertible between them.      Now, historically, in the pirate age one of the most popular boats was called a Sloop, usually being a single-masted sailing ship that was quick and maneuverable in the water. If a Sloop has 2 masts, it becomes a cutter though that doesn't change much about the ship other than making it slightly bigger.      After robbing some nobles' pleasure flotilla, my players earned a massive haul and wanted to upgrade to this popular piracy ship. M
Post a Comment
Read more

- December 10, 2021
One problem that I believe many people notice in RPGS and work to fix, even subconsciously, is having too many choices during character creation. It sounds crazy, but it is a real problem. Anyone who has attempted to make a character in Cyberpunk, Pathfinder, or even 5th Edition D&D knows that the number of choices to be made can make it difficult to quickly make a character, even for experienced players!     5E specifically has 13 classes, a huge number of races, and even more backgrounds, nevermind the character options that unlock as characters level up like spells, subclasses, and feats! There is an enormous number of options to consider, and it can be completely overwhelming for new players.     From my experiences, OSR games generally try to shy away from this, but not nearly as much as we might like to think. Sure, everyone knows about the three main classes of Fighting-Man, Magic-User, and Cleric or Thief, but it is important to remember that Dwarves, Elves, and Halflin
Post a Comment
Read more

- November 10, 2021
I will be the first to admit that I oftentimes enjoy theorizing and philosophizing without actually testing my theories. It is common in the OSR space, that people theorize quite a lot and play maybe a bit less. While armchair thoughts can certainly be productive, they can also be blind to the problems that will crop up in the real world. So, lets take a look at combat based on my experience with testing the combat system I have proposed in my last post on the topic .      Today, I am going to focus on rolling initiative. One thing that I have seen people often talking about is making combat more chaotic and frenetic, sort of the Combat as War instead of Combat as Sport paradigm. One method people propose to do such a thing is changing initiative, such as by regularly rerolling it. I personally really like the idea, since it actually makes initiative bonuses more meaningful than when it is only rolled once. If initiative gets rerolled every round, sure the slow-pokes in combat mig
1 comment
Read more

- October 26, 2021
Recently, prompted by the Wandering DMs podcast, I have been thinking about the trade of magic in all of its forms. My own setting is still incomplete, but I also have enough detail to it that I can start thinking about how magic currently works in it. So, I will be doing a small case study on some fictional average wizard's apprentice. Background Information     There are several important pieces of information to know about my setting, but I will be quick. The single largest change I have made is transitioning off of vancian spell slots to a Magic Points (MP) system with spell costs equal to the spell's level and odds of failure depending on the caster's level. As casters gain more experience, they will even get chances to cast spells for free, though it is very unlikely for an apprentice. A caster will have MP equal to Level + Arc, and they will recover 1d3 + Arc for every week of recovery time (no creating magical items, primarily focused on meditation or study, al
Post a Comment
Read more
More posts